Harold and the Purple Crayon is the saddest book ever written, also the most transparent. It is either a book about a lost son or a book about every man. It begins with scribbles on the first page. We are entering the story on the other side of some unnamed conflict. Order has given way to formlessness. Something has gone terribly wrong. But then: stillness, nay sovereignty. Harold looks away into the direction of the night, turning a blind eye to the domestic disturbance behind. Suddenly he free. He can now escape into the world of unfettered creativity. The night is filled with endless possibilities. Harold has a crayon.

So Harold leaves home to follow the moon on a two-dimensional search for he knows not what. The world is a surface, a canvas for his self-expression. He has his pen of dominion, a life of perfect freedom of the will in the realm of infinite possibility. He begins by creating the ground beneath his feet and the light for his path. Naturally, it begins as a straight and narrow path, but eventually, and just as naturally, he soon wanders off. Now the night is following him.

Eventually, he needs a companion–for it is not good for man to be alone–and so begins expressing himself to find a suitable helpmate. But something foreign seems to be embedded in his memory, something that either looks nothing like him on the surface or quite like him underneath. We begin to see what has been lurking about in Harold’s heart. It is a perfect image of Western culture, an artificial tree protected by a very real monster.

He creates a monster to guard a secret tree but discovers that the monster has a mind of its own and is no respecter of persons. His creation drives him away in fear. He accidentally draws a great deluge but saves himself on a boat. It is still night.

Harold makes it to land, and proceeds to draw a tower reaching the heavens. He now begins search for home. But his search never leads him to turn around, to go back, to regress and become like a child. His search leads him upward and onward. But the gravity of the surface eventually pulls him from the top of his tower. He saves himself again, however, and makes it back to the surface, discovering not how high he could reach so much as how far he could fall. 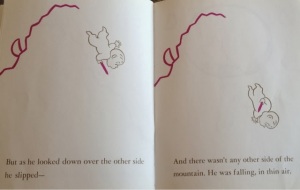 Alone still. He is just a little boy who wants to go home. But he doesn’t know the Way. He begins creating windows and then looking into them, hoping to discover the bedroom mirror hanging on the inside of his door. But every room is empty or filled with the artificial, somehow always seeming at least twice removed once it has left his hand.

But he puts his hand to the plow again, except not the plow at all. He is now determined, now in the big building business. He has the pure freedom of his creativity and thinks perhaps he can realize new horizons with nothing more than the raw potential of his imagination, the new creation of a world liberated from the thistle-laden ground: Harold’s will be done, on earth as it is in his head. He has still not once considered turning around. Even if home were behind him, there’s no reason to believe he could go back. Time doesn’t work that way, nor the human heart. He can no longer believe that the home he remembers in that latent longing is one he actually belongs to. It is infinite progress, not ancient memory, that must satisfy his infinite longing. So the cure for his aching existence must come by way of forgetting, for while ancient memory always seems to haunt the present moment, it still seems somehow more distant than the promised future that is forever at our fingertips.

So Harold tries to give form to the haunted hole in his heart in order to create a home to belong to. He builds more windows. He builds an entire city. And in the saddest scene ever illustrated, an anxious little boy climbs his towers with crayon in hand making a kingdom of windows revealing the hollow of homesickness.

It’s as if all of human life were born out of some grand front porch that continually expands in our heart with age. And all we know to do is try to match its grandness with grandiosity. So white-knuckled men scrape the clouds in high flying homes that feel nothing like home. They feel like heartache. But they are not dressed like heartache. For that, one need only to visit the real lifeblood of any city, its subway. The grandiosity of the surface is deflated in its subterranean confessional, where the height of human reach above is curiously incommensurate with height of human beings below. Down there, it feels like an entire world that has been shrunk to an embarrassingly navigable size. Everyone knows exactly where they are going, though never feeling any less lost. This is why it is impossible to ride the subway without wanting to cry a little. There is something human there and something missing. There is proximity, and there are infinite distances. The city somehow feels at once like being in control and being in a cage. It is the longing for transcendence and the consolation of the towers of trade. It is the feeling of a concrete Wilderness, open possibilities filled with sub-ways.

Harold’s heartache creates an entire city the size of his homesickness. But it didn’t cure it. It is the saddest picture I have ever seen. 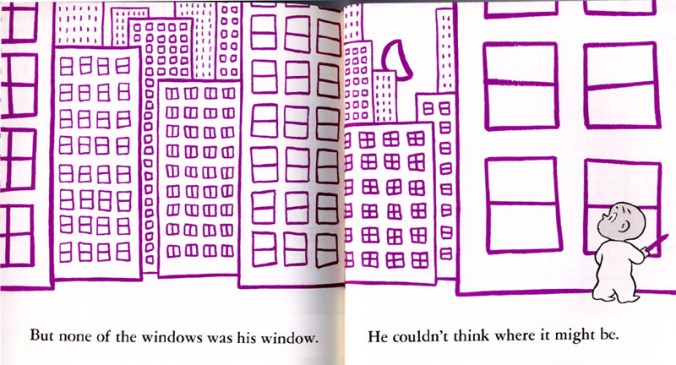 But Harold finds help. He turns to a law enforcement officer for help to find his way home, but he is no help. All he can do is enforce the law, which simply reinforces Harold’s constitution of self-governance. Harold must stay the course. To turn back would indeed be unconstitutional.[1]

So he settles. He can neither find his home nor the light of day. He accepts that man was not created for the greater Light but for the lesser. The moon is the only reflection of light in his world, for the man is just a contribution to the shadow, whose truest form is occasionally found in a full about-face eclipse. Harold’s self-made home will be framed around the endless night, his only vision of light, something like the vision in Plato’s cave. Refusing to turn around he will never discover the genesis of his sight, the very warmth that always seems to hit him from behind in the memory of a home he no longer can believe is real. So he exchanges the future for the past and builds a shadow of the home he longs for. He is now on the other side of that empty window in which the moon is forever imprisoned.

The story ends with the end of all possibility. Harold is not only given to the night, but any possibility of the morning with him. Harold will slip into oblivion, but only because he tried to create his way out of it. The only thing worse than embracing emptiness is denying it, which is the difference between the nihilism of creation and creation in nihilo, between hopelessness and false hope, between godlessness and the no-god, between an honest heralding of despair and today’s bullhorn gospel of progress: between the fall of Adam and the rise of Babel.

It is the far end of self-expression in the triumph of self-discovery, the absolutization of human freedom in rebellion to the Light. Harold has succeeded in constructing his hell.

Hell is the life that immortalizes emptiness as its god and when the paint dries will live forever in its image.

“The purple crayon dropped on the floor. And Harold dropped off to sleep.