Today commemorates the day that Jesus spoke thousands of years into the future, warning the Western world of its temptation to lose wonder at the cost of bread, faith at the cost of kingdoms, to discover reality at the cost of art.

Gustave Courbet, nineteenth century French artist and leader in the Realist movement, once wrote, “Painting is an essentially concrete art and can only consist of the representation of real and existing things. The essence of realism is its negation of the ideal.” Realism, of this sort, seeks to represent “existing things,” that is, in Courbet’s eyes, visible things in the “natural” world, and to do so void of the subjective expressions of expressionism, the unrealistic perfections of Idealism, and christened unicorns of Romanticism. This unimaginative mood was the product of an aging “Enlightened” world, whose micro- and telescopes had failed to find a god in the heavens or even an ounce of fairy dust on earth. So it was time for art to come to its senses. All that mattered was representations of matter, meadows and potatoes and, if you like, dead deer. 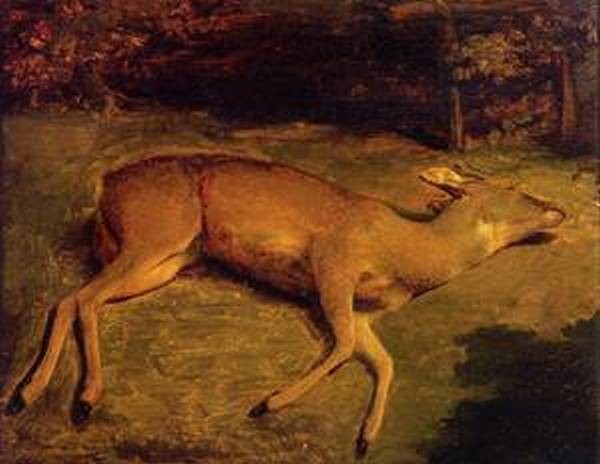 The painter had to become a photographer.

But I find the irony in Corbet’s rigid words and unexpressive deer rather amusing. Any work of art, whether the angels of the Renaissance or the deaths of Realism, that tries to disguise itself as a mere reflection of the representable world is like a magic zebra trying to disguise its magic by writing a novel about a normal zebra. It is one things for a spontaneously organized cluster of atoms to find itself needing bread and water to maintain its present structure, which it calls life, but it’s quite another for this soulless cluster to find that cannot seem to live on bread alone, to find that it consistently needs to appreciate the sights and sounds observed in the random collisions of colors against canvas and breath passing through bent brass.

The artist of Realism is in a damning cycle: he paints the perfect self-portrait—hollow eyes, impassive lips, bloodless cheeks—human as mere matter. With the last stroke he steps back and with great satisfaction grabs a mirror to compare. It is perfect. It is beautiful. His admiration begins welling up like a fountain filling his face with curves and color, like a wooden puppet becoming a boy. But as it happens, the dark windowed eyes in the portrait now seemed a universe away from the shiny globes, infinitely reflecting back and forth with the mirror, as though searching for something, or someone, beyond the reflection. He glances again at his masterpiece and, either to his dismay or delight, suddenly realized it was a masterpiece indeed, but a masterpiece of Idealism. It was the ideal of the Modern man, but it was not a real man. The reality of his face condemned the Realism of his portrait. Faithfully representing reality through a work of art only revealed that reality is a work of art. He couldn’t help but admire the masterpiece in the mirror and even its shadow on the canvas, unrealistic though it was. He was a romantic and couldn’t help it. The distance between a beast’s mind and an artist’s canvas is infinite. The only way it can be bridged is if that beast confesses his secret. The Zebra is only magic because he is a writer. The beast is only human because he is an artist.

Man does not live on bread alone.